Stake your SOUR right now by holding a SOUR balance over the minimum, within any non-custodial SLP wallet (one that you hold the private keys to; not tipbots or exchanges).

Low Level Staking Rewards –
Distributed every 3 months to SOUR holders with a 300+ balance in one address. No coin age requirements for low level staking rewards.

Daily Staking Rewards –
Distributed daily to SOUR holders with 1,000+ SOUR balance within one utxo (or one transaction) that is held for 2016+ confirmations (roughly 2 weeks). The staking system is distributing 465.753425 SOUR per day (or ~170,000 SOUR per year) at the current emissions. Daily staking rewards are determined based on the utxo balance being staked for each address, divided by all other eligible staking balances, multiplied by the daily staking reward amount.

Stake SOUR from any non-custodial SLP/BCH wallet and move or spend it at anytime in order to stop staking. There is no need to deposit SOUR into any smart contracts, platforms, custodial wallet in order to stake right now. There is no requirement to stake for a predetermined amount of time. Because the SOUR is staked directly from your wallet, you can move it to stop staking when you want. This is one of the simpliest and direct forms of PoS (Proof of Stake) that operates directly on the Bitcoin Cash blockchain.

SOUR is a Simple Ledger Protocol (SLP) token that is built on the Bitcoin Cash (BCH) blockchain. SOUR is used by the community to show appreciation & reward those promoting Bitcoin Cash and adoption. The SOUR token is among the first to implement a system similar to Proof of Stake. SOUR offers BCH & SLP airdrops to holders, a merch shop to spend or earn SOUR, weekly poker tournaments where you can win, #Donate4SOUR initiative to earn SOUR by donating BCH to select orgs, and more development always in the works.

How can I Stake my SOUR?
What is Coin Age?

Coin age is determined by the number of confirmations your unspent transaction output (utxo), that is holding the tokens, has (the number of BCH blocks since the utxo was last moved).

What is a utxo?

Utxo is an unspent transaction output which holds your BCH and tokens. Utxo’s can hold any number of coins or tokens. For example, if you send yourself all your SOUR in one transaction then that uxto will contain all of your tokens and BCH you sent and will age over time with number of confirmations until it is moved again. Utxo’s can be split when sending so it is wise to stake your SOUR in a wallet that is separate from your SOUR spending, such as a paper wallet.

What is a paper wallet?

A paper wallet is just a wallet which stores your BCH or SLP tokens offline, with a single address and a single private key on a piece of paper. You can then sweep the assets through the QR code into the Badger or Zapit wallets or manually input your private key into any SLP wallet when you wish to send them.

Why am I not getting staking rewards?

If you’re storing your SOUR in a wallet which uses multiple addresses (new address for each deposit) then you may not be receiving staking or airdrop rewards. This is because each deposit, or change from a send, will go to a newly generated address. Your SOUR must currently be pooled into one UTXO (transaction), above the minimum balance, to be eligible for airdrops or staking rewards (requires minimum coin age). You can easily do this by sending 1000+ SOUR back to yourself, or to a separate staking wallet.

You can ensure this by using a wallet that only has one address, such as Badger or a paper wallet. You could also send the SOUR back to yourself within your wallet (and note that address for any future deposits), although this method can cause issues if you spend SOUR from the same wallet. Utxo’s can be split up when sending and the change sent back to yourself, resetting the number of confirmations (coin/token) age.

Paper wallets can be a great way to safely store your SOUR or other SLP tokens offline in a cold storage wallet. It will ensure your SOUR will start staking when holding above the balance and coin age minimums. If these requirements are met, your SOUR will continue staking uninterrupted until the it is swept from the wallet, or moved from the utxo. Low level staking rewards only require holding 300+ SOUR in one address. Daily staking rewards require a utxo (or transaction) with 1K+ SOUR and 2016 confirmations to be eligible. 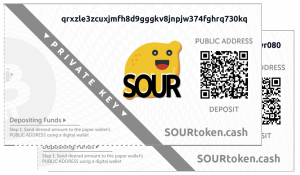 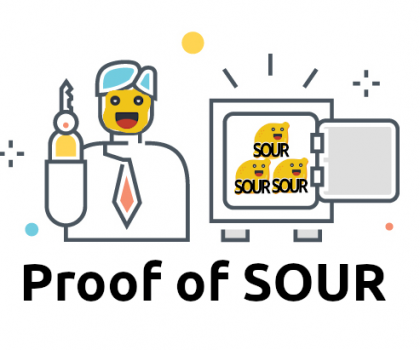 In order to receive daily staking rewards, a holder must:
1. Have at least 1,000+ SOUR balance in one address, which they hold the private keys to (seed words or WIF private key).
2. Have not moved their utxo holding the tokens in at least 2+ weeks or 2016 confirmations.
(2016 confirmations/blocks x 10 min per BCH block avg = 20160 minutes, or 2 weeks).

Current Staking APR as of 12/2/2020 – 65.5801%*
*Annual Percentage Rate. Meaning that 1,000 SOUR staked for 1 year, or 365 days, would earn roughly 655.801 SOUR back at the current rate. The APR is subject to change daily, depending on the total amount of SOUR being staked, number of eligible addresses (or stakers) and the current rewards schedule.

During the first year, the system will distribute roughly 170K SOUR through daily staking rewards. The minimum balance increase schedule, emissions schedule and distribution breakdown across all services will be released soon. All SOUR paid out is currently being stored in a cold storage, hardware wallet (Satochip.io), with only the staking app having access. Stake SOUR from any non-custodial SLP/BCH wallet and move or spend it at anytime in order to stop staking. There is no need to deposit SOUR into any smart contracts or platforms in order to stake right now.

If the utxos that are staking your SOUR are moved, then the coin age is reset and starts again. Just as if you send your tokens to another address, confirmations for that new transaction will restart. Staking rewards are calculated by dividing each individual balance by the total balance being staked (this is an addresses share of coins vs everyone elses), then multiplying that by the total daily staking rewards for each eligible address. The more SOUR you stake and the longer you stake it, the more SOUR you will earn.

Statistics for Staking Rewards During Testing

There will be an emissions schedule, minimum balance increase schedule and distribution breakdown worked out. Failsafes will be added for the staking app (in case an API is down for example). The new staking system will output staking rewards on a daily basis (this may be moved to bi-daily or weekly in the future). The plan is to go live with the configurations above shortly after the November 15th BCH fork, while working to improve the staking system over time. The code will eventually be made open source for everyone to review and fork if they wish. SOUR in storage will be locked into smart contracts to release a specific amount per year to the staking system and for other distribution methods.

Note: This application is currently experimental and dynamic. Things may break or be delayed and we intend to change and improve as needed. There is ZERO risk of losing your funds if you hold the keys to your wallet at all times, as there is no need to lock SOUR up in any platforms or smart contracts. Right now it is simply an application that calculates and pays out staking rewards to eligible holders based on the listed specifications. We’d like to eventually move to a more decentralized approach, possibly with multiple nodes running software that is competing to pay the low BCH fees for the staking reward transactions. Those running the software would be rewarded additional SOUR for helping to secure the network and keep the staking rewards system running. We cannot guarantee staking rewards until the system is truly decentralized but we are planning to run the current system, which will pay out daily staking rewards (or compensate those for any missed rewards), as long as possible.